Starting SEE hack journey at the Ministry of Justice 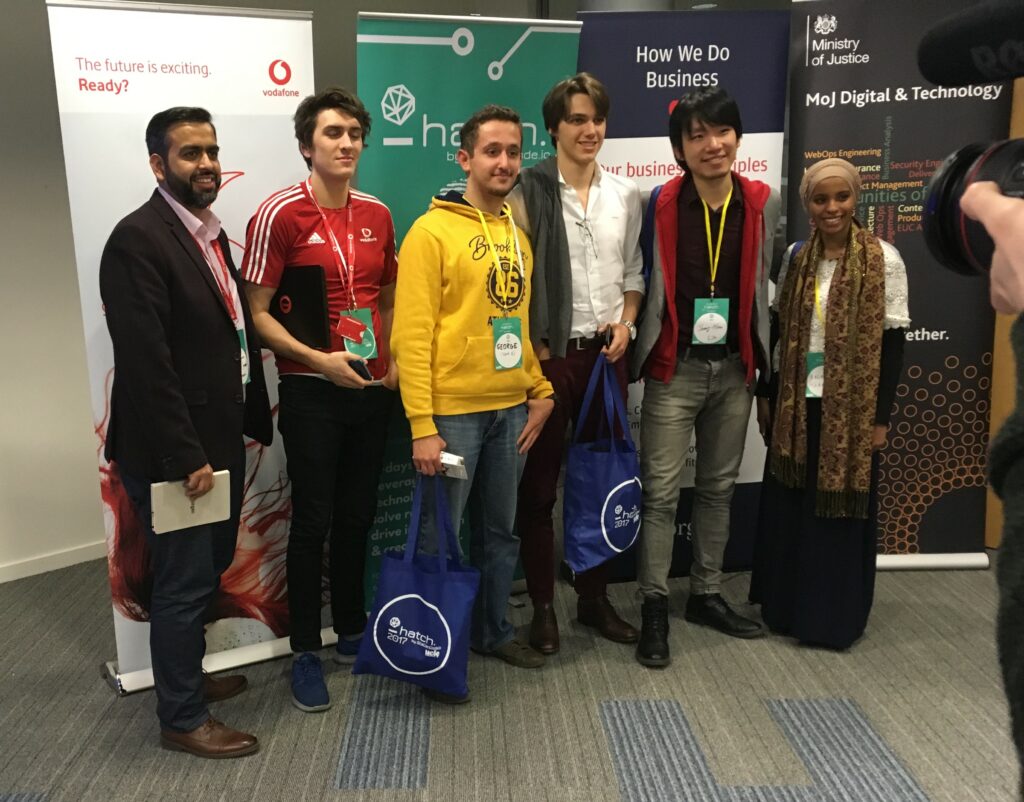 What’s the best and most modern way of finding solutions for today’s problems?  Well, we’re talking about a hackathon that was honoured to be sponsored by the Ministry of Justice at St. James Park, organised by UCL Entrepreneurs and SheCanCode. Months boiled, the infinite mass of ideas, 48 hours, 20 teams, 28 universities, 100 participants, 20 masters, and one winning team.

However, let’s start from the beginning. SheCanCode is a project that emphasises that high-tech should not be male-dominated, and women, female students, mothers, and daughters should have equal access to programming, and this should not surprise anyone. Therefore, they focus on instructing and supporting more women in tech and coding.

On the first day, after the opening speech about inspirational influencers from the high-tech startup environment, the students were divided into teams. The initial brainstorming allowed students from all possible fields – not just technical, to think creatively about solutions that are fixing the world.

In a tense and creative atmosphere, participants worked on a unique project within their teams.  However,  the Hackathon was not about small stakes. The best teams had the opportunity to be noticed by recruiters from JP Morgan and Vodafone.

During their lunch and coffee breaks, participants were able to get advice and mentor support. In addition, the Hackathon included a training workshop by SCRUM Education Experience, facilitated by the main moderator of the event, our CEO Aga Gajownik who helped participants organise, structure and develop ideas around the project. The Hackathon and workshop was divided into blocks across the two days.

The whole of Saturday passed exceptionally quickly. Those who craved warm food were satisfied with the 150 pieces of pizza brought by UberEats arranged in towers. However, despite the participants already feeling tired, the biggest challenge of the Hackathon was yet to come.

Sunday morning was spent refining the projects. Then, as the main pitch before the jury and the audience was approaching, the atmosphere of tension reached its zenith.

After 3 pm everyone gathered in the great hall, and in the flashlights of photographers, live Facebook reports and Twitter short rations, the teams began to present their high tech achievements.

Students’ creativity did not know the limits. The 3-minute demonstrations with nasal prototypes and business models showed the maturity and willingness to help in solving complex problems on our planet. For example, the concept of monitoring pregnancy is a line from developing countries to digital help to fight dyslexia and scanning products that cause food allergies. These were just some of the sensational project pitches. After lengthy deliberations, the judges picked the following teams whose ideas were;

1. To create an app to help tag animals on farms using blockchain.

3. Application for refugees, helping to monitor all required documents

The main prizes were gifts and an invitation to the fast track recruitment process at Vodafone.

A few words from the participants:

“It was insane. It was not the hackathons I am familiar with.” I thought. We followed the sprints on the Trello provided by the scrum master, from prototyping, testing to the business model and growth hacking. Finally, with the help from the mentors and the scrum master, we came up with our solution and started to work on the prototype and the business model in the afternoon. At that moment, I realised that this Hackathon offered a lot more than other hackathons.

It was not merely a hackathon but a two-day project development workshop to bring our idea to life practically and effectively.

This was crazy awesome!!

It was a really fantastic experience during the two days. We went through a whole process from brainstorming, prototyping to creating business models.

To put it shortly, Hatch London was the best Hackathon I have ever attended. I can’t believe this was the first Hackathon SheCanCode hosted. – Read Linuk’s full article here.

Check out the video from the event:

Educational resources to get you started​

Why wait to learn? Browse our extensive range of materials, studies and articles to kickstart your educational journey.